My youngest turned 4 over the weekend, and she requested a strawberry cake for her birthday.

This turned out to be a little more of a challenge than originally intended. Probably influenced by our viewings of the Great British Baking Show, she wanted a giant layer cake, frosted white and topped with fresh strawberries. The cake itself also needed to be strawberry flavored and pink.

Since we were taking the cake to a family birthday party at which some family members with food allergies would be present, I needed to make it from scratch, and I needed to ensure no corn, soy, or cottonseed oil products would be included in the baking. That meant no powdered sugar, which contains cornstarch to prevent caking. It also meant a deep dive into the world of strawberry cake to find a solution.

In the end, I went with a vanilla cake recipe, substituting pulverized freeze-dried strawberries for part of the flour. I baked the batter in three eight-inch layers and left them to cool while I contemplated icing.

So, buttercream would be ideal, but it contained powdered sugar, making it off-limits.

Seven-Minute Frosting is plain white sugar, egg whites, water, and cream of tartar beaten over boiling water for seven minutes to create a thick, glossy icing that holds its shape and acts like candy when it sets. The day I was making this cake, the humidity was ridiculous, so the icing didn’t set up well at all. I persevered, however. And in doing so, I made a rather tasty mistake.

As I stacked my layers of strawberry cake, I added a layer of icing and fresh sliced strawberries between each cake, forgetting that fresh strawberries and sugar together produce syrup. It got very sloppy for a bit. I spread the icing over the top, letting it drip down the sides, and my preschoolers “helped” put the fresh cut whole strawberries, cut side down, on the top. The icing kept melting down the sides with the humidity and the chemistry, so I set it, uncovered, in the refrigerator for what amounted to about eighteen hours.

I quietly scooped frosting and strawberries off the cake plate every so often all evening, spreading them back up over the sides of the cake.

The next day, the icing had set. The cake looked pretty. And when we started to serve it, lots of wonderful things became apparent. First, the icing layers crackled as I sliced through the cake, sounding like rich candy. They weren’t too dry to cut, but provided a delicious texture with the soft berries and the rich cake. The cake itself, far from being dry, had soaked up the strawberry syrup created by my mistake. As one guest said, it tasted like old-fashioned shortcake when it had been soaked in the juices of the strawberry syrup.

We ate it all up. And the birthday girl loved it.

If you try it, I used the vanilla cake recipe found here. I used an entire 0.8 oz bag of freeze dried strawberries, blending them until they resembled flour. I spooned the strawberry dust into a one-cup measure, then added enough all-purpose flour to the cup to fill it up, incorporating it into the flour quota for the recipe. 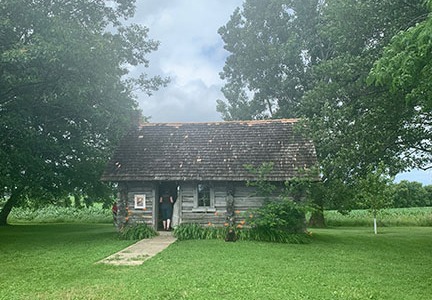 LauraPalooza is one of my favorite places to go. A convention wholly dedicated to amalgamating the world of Laura Ingalls Wilder fans, scholars, and researchers, the event is sponsored by the Laura Ingalls Wilder Legacy and Research Association and is held every two to three years.

This year, the gathering convened in the LaCrosse, Wis., area with an eye toward a visit to Pepin, Wis., on the last day. Pepin is closest to where Laura was born in a small cabin about seven miles northeast of the town, which is located on the banks of Lake Pepin, an exceptionally wide spot of the Mississippi River.

I wasn’t able to attend all of this year’s convention, but I arrived Tuesday afternoon in time to hear the last few presentations, including a Q and A with Wilder expert William Anderson. Wednesday morning offered presentations about the psychology of the mother-daughter relationship, the “missing” Grace Ingalls,  and an entertaining presentation about the route taken by Laura and Almanzo from De Smet, S.D., to Mansfield, Mo., in 1894.

The afternoon, however, was taken up with the trip to Pepin.

I drove myself, and headed straight up the Great River Road to do so. The route, 75 miles from LaCrosse to Pepin on Highway 35, takes drivers through numerous small towns that sprung up along the Mississippi River during its heyday as the main means of travel in the area. The Mississippi still welcomes boat traffic, and in fact, it’s an active thoroughfare. The views along the way are spectacular, and each little town does its best to help travelers on their way.

I stopped in Nelson at the Nelson Cheese Factory on the way (on the recommendation of LIWLRA Homesite Representative Lynn Urban) and enjoyed a white chocolate raspberry ice cream cone. It’s a cozy place that also offers a variety of lunch items, coffee, wine, and assorted other products that make it an ideal place to get a snack and stretch my legs.

I then made my way through Pepin to the Laura Ingalls Wilder Birthplace Wayside.

I’ve been there several times, first in 1990 as a fresh-eyed 18-year-old on her first road trip without parents. That was nearly exactly 29 years ago. The little cabin that marks the site has been replaced once since then, and its sturdy construction, nestled in among the trees that have really grown in the last thirty years, made it look cozy.

LIWLRA and local host volunteers Susan Goettl and Julie Miller dressed the part for the event, staffing the cabin in their calico dresses and bonnets, and they dressed the cabin as well. Normally, it’s open to visitors but left empty to keep things from walking off. As a treat on Wednesday, however, Miller and Goettl had dressed the cabin, as well, making it appear as cozy as it might have in Laura’s day.

One special treat came from Anderson, who came along on the tour.

He pointed out the general area that the original cabin had once stood, several feet southwest of the replica in a spot roughly near the wayside driveway’s entrance. A little rain kept umbrellas up, but it didn’t dampen the enthusiasm the crowd had for learning something new about Laura.

That stop kicked off the afternoon, which also featured a visit to the Museum in town, which had Wilder exhibits and merchandise. I also drove down toward the lake, up to the town park named after Wilder, and out to the farmer’s stand on the corner of the GRR and County CC, which takes visitors out to to the homesite.

Also scheduled were guided visits of the Oakwood Cemetery, where several significant people are buried, a supper, and a dance to mimic the Dance at Grandpa’s featured in Laura’s book, Little House in the Big Woods. Knowing I had to drive all the way home, however, meant I had to leave earlier than anticipated. I missed the dance, but I heard that it was a good time.

The Great River Road is always open for traveling, and a fun, leisurely drive to take. It’s not necessary to pair it with a trip to Pepin, but it’s always interesting to make that stop.

And as for LauraPalooza? The next convention will be near Malone, New York, birthplace of Almanzo Wilder, in summer, 2022. I’m already saving up.